Messing around with cloud computing

I was tasked at work with moving some of the web infrastructure from a web hotel, with very limited access and permissions to a virtual machine which allows us to do more things. I messed around with a few different hosts, mainly amazon and digital ocean, and I went with Digital Ocean after reading a bit up on it online, as they have best performance per core, as well as having free support. If I were to break something beyond repair. then I'd be in good hands, or hopefully I would be.

What we need to host is just a some web services, as well as a medium sized database that's need by the webservices and well as some data analysis tools.

I setup this site as a test server, so I could get formillia with the performance as well firewalls, storage and just not having hardware access. So currently I'm running a clone of my own database, this site, and my API's on here, I'll probably be throwing some more things on here, but as i have my dedicated server and as many of them are quite CPU and storage intensive I highly doubt it'd be worth the cost.

So is the wine rack really done?

It's of cause still a work in progress.
But it's ready for the first prototype to be cut, i did have to redo it in inventor as i wasn't able to get all the measurements to be perfect in AutoCAD.
V1 looks like the following in 2D, it can be downloaded at drawing.iam file

I've been doing a bit more work on the wine rack, I was supposed to have gone to an introduction thing at Cortex lab so I was allowed to use the laser cutter there, but I found out I started at 1 and was not a thing you could just show up for so current ETA for the first prototype is currently next Thursday, so lets see what happens.

Design wise I've working a bit more on the drawing it, I've added the middle pieces and I've changed the dimensions to 56.5 cm x 27 cm compared to 57 cm x 27 cm before, this is due to my cabinet being 57, and I'd like some wiggle room, just to be sure, it fits. Furthermore I've added the cross going supporting struts and I have worked a bit more on some design options but, as things are at the moment I'll just want a plain simple looking wine rack 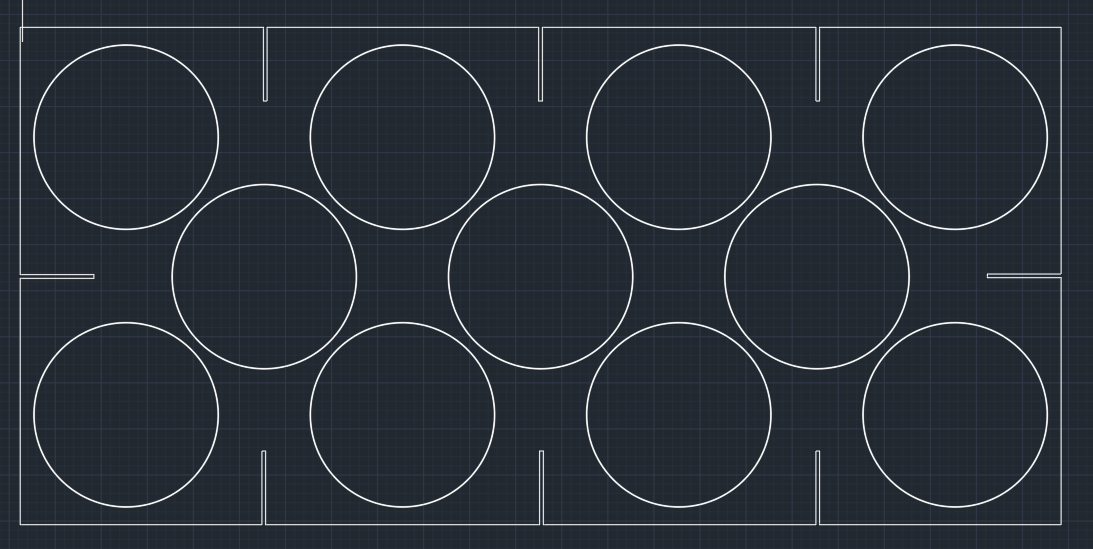 I have considered using the space in-between the middle 3 bottles for storage of wine gear. but I fear it's going to be something that means I'll have to postpone the first prototype so I'd rather just make what I have now, use it a bit, and improve it in the ways that I can.

The biggest problem with this project so far has been relearning to use a cad program, last time I used one was in gymnasium and that was very limited as two of the guys in my group had spent two years working with CAD, and technical drawing.

There's a bit of a learning curve when you're just doing things, but who doesn't like learning new skills?

So, I'm currently have a few ongoing projects. One of them is this website, It's not the hardest thing to do, It's just adding a few new things when needing them, but It can still be a bottomless pit from time to time.
I think the most time consuming thing so far on here is getting some of the alignment to work, For quite a few of them I’ve just accepted that it's never going to be perfect, and just leave it be. The most notable one is the Snapchat icon, I didn't make the CSS for the website and somewhere in there it applies a colour filter. The latest thing I had to change was that I needed to update all external links, so they had they target="_blank" in them so they're opened in a new tab.

Then there's the Plex server and the surrounding infrastructure. It's a mess to be honest, it current has 4 supporting services running, PlexPY for monitoring it, Plex Request for people asking for content, the content acquisition system, and the database behind it to store all the data.
The worst think about hosting the server is dealing with old hardware. Some of the drives have been running for close to 1500 days, and Are at the point where I only store easy acquirable content on them, My main workhouses are 8 TB drives, Currently I use WD red 8 TB and Seagate Archive Drives, They both have their benefit, The WD being faster and rated for a longer lifetime, but the Seagate being quite a bit cheaper.
The worst drives I’ve had yet are Seagate 2 TB drives, I didn't know at the time, and it's only after I’d put them to use I found out that they made a new production line, which wasn't quite up to standard to all the drives from there had a fairly high failure rate.
If you want to look more into this I suggest you look at the blackblaze.com hard drive Report

By far the most time and energy consuming task at hand is learning to play the guitar. I was given my dads old guitar 2 weeks ago, and I’ve been trying to learn how to play it with some success. It's great fun, but I'm still at the point of my fingers start hurting after playing for a rather limited amount of time.
Not even to mention that I’m currently just doing it in my doom room and with the noisy constraints that we have I’m unable to play late in the evening and people need to sleep.

My newest project I call Project wine rack, I needed a wine rack for my room, and I was too cheap to buy one, so what does one do? You laser cut one, Right?
Or that’s what I do rather, It's good brushing on my CAD drawing skills, and making something for myself, Never fails to brighten the mood.
The current state of the project is that I've Figure out what I want, What size it should be, and how it should look, The main thing holding me back at the moment is that I don't know how thick the wood I’m going to cut is, so I can't built the supporting structure or even cut the first parts, which is kind of an issue, but as it looks at the moment I’ll head to the hardware store and buy some wood.

Design wise I'm considering adding some mesh between the bottles for a more spacey look. and I would be able to store some things in them like wine opener and other wine accessories.
But now that I think about it I can only use the middle holes 2 holes as the other will be needed for structural support.
So the modern design look won’t work. Need to sit down and Reconsider some of these things.

I'm a student, so my food habits vary a lot depending on time, some days I have 5 minutes to eat, and some days I spend 2 hours making a proper meal. I prefer simple healthy meals.
Salmon is always a good choice, throw it in the oven for around 40 mins with some root fruits on a baking tray below it and you have a really well made meal, with very little effort. The way I normally go about making it is getting:


Simply put the fish in a tray light salt and pepper it, slice the peppers, dill and lemons and put them on top on the salmon, lastly pour some olive oil on it and it's ready for the oven.

For the root fruits I Normally do potatoes, sweet potatoes, Carrots, beetroot and Parsley root, just cut them into wedges, put them in a plastic bag or container add some salt, pepper, paprika and chili. lastly add olive oil so the vegetables are lightly oiled. Put them on a baking tray or dish and put them in the oven for around an hour.
What you end up is a nice meal, it takes 10 minutes to prepare around an hour in total including cooking time. But remember all my times and measurements are handwavy and I just do things as it happens
I may add a picture here, but I'm too lazy to dig into my backlog of photos to find one.

So i got bored to I'm going to start writing down some random things on here. This will be everything from small projects i'm working on to some of my cooking. This page will develop a lot as i do more work on it. but lets see what happens. 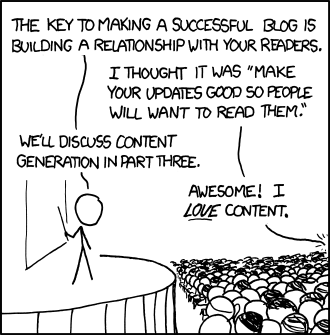 https://xkcd.com/741/
But to get in on a more serious topic, i just need to start writing more. code more, and just do more things, and this seems like a good way to improve my web coding and my writing skills. I havn't yet decided if i should add some kind of comment section, or if i should add anything else. next project atm, is to do some each post gets a dynamic subpage and so that all posts gets added to the main blog page when i add the .php file to the /blog folder. So many things to do. so little time.
- Mark Jerveund